In a previous article, I’ve discussed an old (but important) category of memory-corruption vulnerability called “stack buffer overflows”, and how we, as attackers, can exploit these vulnerabilities to take control of a remote program and make it run our shellcode.

For this reason, before I write about exploiting heap-based vulnerabilities, I will use the first two parts of this series to talk about how the heap works. This first post will be an introduction into some high-level concepts, and a discussion about how new heap chunks are created. In the next post I will do a deeper dive into the technical implementation of how chunks are freed and recycled.

What is the heap, and why do people use it?

First things first: What is the heap, and what is it for?

Here is an example of how a C program might allocate, use, and later free a structure on the heap:

So long as the programmer follows a few simple rules, the heap manager ensures that each live allocation won’t overlap any other. This feature makes the heap a very useful, highly used, and therefore very performance-sensitive feature of most C and C++ programs.

The following graphic lists some basic rules that programmers must follow when using the heap, alongside some of the vulnerability categories that occur if the programmer violates these rules. In later posts I will discuss all of these heap-related vulnerability classes in more detail, but for now I’ll just show how the heap behaves when it is being used correctly. 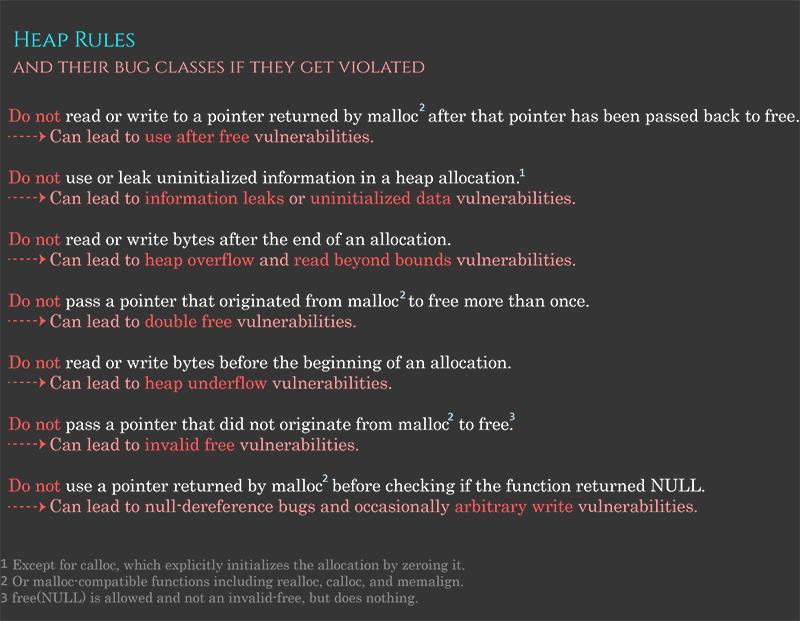 Of course, malloc and free aren’t the only way C and C++ programmers interact with the heap. C++ developers often instead allocate memory via the C++ operators new and new[]. These allocations must be released using the corresponding C++ operators delete and delete[] rather than using free. Programmers can also allocate memory via malloc-compatible heap functions like calloc, realloc and memalign, which, like malloc, are eventually released via free.

For simplicity I’ll initially just discuss malloc and free. Later we’ll see that once we understand these two, most of the other heap functions become very easy to understand.

Here is an example of how a C++ program might allocate, use, and later free a structure on the heap: 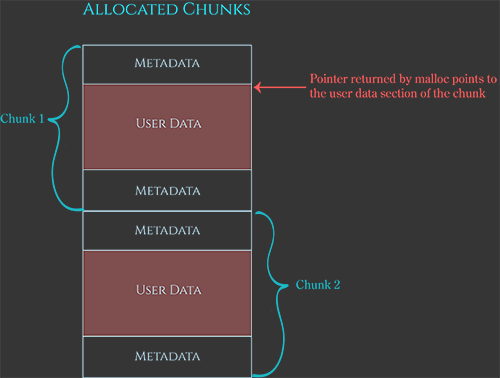 So how does the heap manager internally allocate these chunks?

First, let’s look at the (heavily simplified) strategy for allocating small chunks of memory, which is the bulk of what the heap manager does. I’ll explain each of these steps in a bit more detail below, and once we’ve done that we can look at the special case of huge allocations.

The simplified chunk-allocation strategy for small chunks is this: 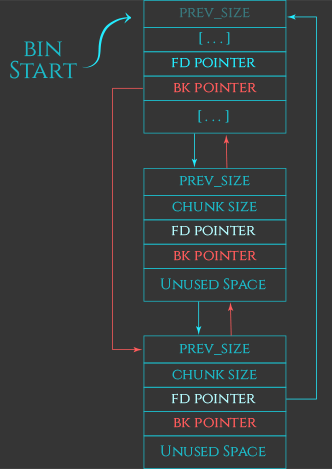 Conceptually, allocating a previously-freed chunk is very simple. As memory gets passed back to free, the heap manager tracks these freed chunks in a series of different linked lists called “bins”. When an allocation request is made, the heap manager searches those bins for a free chunk that’s big enough to service the request. If it finds one, it can remove that chunk from the bin, mark it as “allocated”, and then return a pointer to the “user data” region of that chunk to the programmer as the return value of malloc.

Allocating from the top of the heap

Once the free space at the top of the heap is used up, the heap manager will have to ask the kernel to add more memory to the end of the heap.

Eventually, expanding the heap with sbrk will fail–the heap will eventually grow so large that expanding it further would cause it to collide with other things in the process’ address space, such as memory mappings, shared libraries, or a thread’s stack region. Once the heap reaches this point, the heap manager will resort to attaching new non-contiguous memory to the initial program heap using calls to mmap.

Very large allocation requests* get special treatment in the heap manager. These large chunks are allocated off-heap using a direct call to mmap, and this fact is marked using a flag in the chunk metadata. When these huge allocations are later returned to the heap manager via a call to free, the heap manager releases the entire mmaped region back to the system via munmap.

*By default this threshold is 128KB up to 512KB on 32-bit systems and 32MB on 64-bit systems, however this threshold can also dynamically increase if the heap manager detects that these large allocations are being used transiently.

On multithreaded applications, the heap manager needs to defend internal heap data structures from race conditions that could cause the program to crash. Prior to ptmalloc2, the heap manager did this by simply using a global mutex before every heap operation to ensure that only one thread could interact with the heap at any given time.

Although this strategy works, the heap allocator is so high-usage and performance sensitive that this led to significant performance problems on applications that use lots of threads. In response to this, the ptmalloc2 heap allocator introduced the concept of “arenas”. Each arena is essentially an entirely different heap that manages its own chunk allocation and free bins completely separately. Each arena still serializes access to its own internal data structures with a mutex, but threads can safely perform heap operations without stalling each other so long as they are interacting with different arenas.

The initial (“main”) arena of the program only contains the heap we’ve already seen, and for single-threaded applications this is the only arena that the heap manager will ever use. However, as new threads join the process, the heap manager allocates and attaches secondary arenas to each new thread in an attempt to reduce the chance that the thread will have to wait around waiting for other thread when it attempts to perform heap operations like malloc and free.

With each new thread that joins the process, the heap manager tries to find an arena that no other thread is using and attaches the arena to that thread. Once all available arenas are in use by other threads, the heap manager creates a new one, up to the maximum number of arenas of 2x cpu-cores in 32-bit processes and 8x cpu-cores in 64-bit processes. Once that limit is finally reached, the heap manager gives up and multiple threads will have to share an arena and run the risk that performing heap operations will require one of those threads to wait for the other.

But wait a minute! How do these secondary arenas even work? Before we saw that the main heap is located just after where the program is loaded into memory and is expanded using the brk system call, but this can’t also be true for secondary arenas!

The answer is that these secondary arenas emulate the behavior of the main heap using one or more “subheaps” created using mmap and mprotect.

Sub-heaps work mostly the same way as the initial program heap, with two main differences. Recall that the initial heap is located immediately after where the program is loaded into memory, and is dynamically expanded by sbrk. By contrast, each subheap is positioned into memory using mmap, and the heap manager manually emulates growing the subheap using mprotect.

*By default, the maximum size of a subheap–and therefore the region of memory reserved for the subheap to grow into–is 1MB on 32-bit processes and 64MB on 64-bit systems.

This is done by asking mmap for pages that are marked PROT_NONE, which acts as a hint to the kernel that it only needs to reserve the address range for the region; it doesn’t yet need the kernel to attach memory to it. 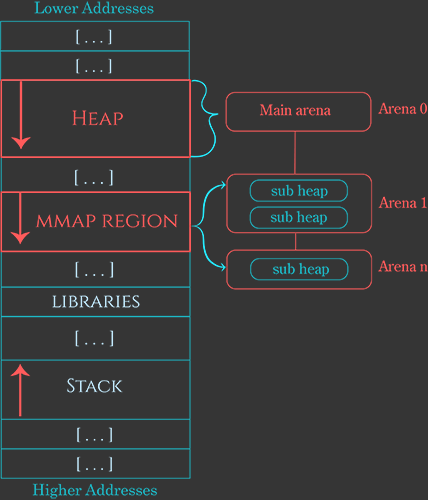 Where the initial heap grew using sbrk, the heap manager emulates “growing” the subheap into this reserved address range by manually invoking mprotect to change pages in the region from PROT_NONE to PROT_READ | PROT_WRITE. This causes the kernel to attach physical memory to those addresses, in effect causing the subheap to slowly grow until the whole mmap region is full. Once the entire subheap is exhausted, the arena just allocates another subheap. This allows the secondary arenas to keep growing almost indefinitely, only eventually failing when the kernel runs out of memory, or when the process runs out of address space.

To recap: the initial (“main”) arena contains only the main heap which lives just after the where the program binary is loaded into memory, and is expanded using sbrk. This is the only arena that is used for single-threaded applications. On multithreaded applications, new threads are given secondary arenas from which to allocate. Using arenas speeds up the program by reducing the likelihood that a thread will need to wait on a mutex before being able to perform a heap operation. Unlike the main arena, these secondary arenas allocate chunks from one or more subheaps, whose location in memory is first established using mmap, and which grow by using mprotect.

Now we finally know all of the different ways that a chunk might get allocated, and that chunks contain not only the “user data” area that will be given to the programmer as the return value of malloc, but also metadata. But what does this chunk metadata actually record, and where does it live?

For now, we’ll just look at live allocations, which have a single size_t* header that is positioned just behind the “user data” region given to the programmer. This field, which the source code calls mchunk_size, is written to during malloc, and later used by free to decide how to handle the release of the allocation. 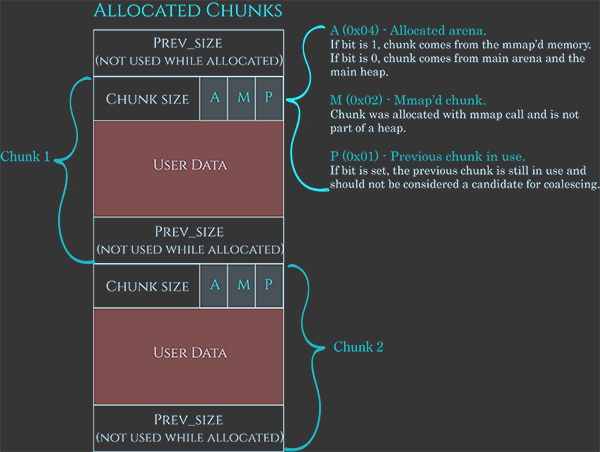 The “M” flag is used to indicate that the chunk is a huge allocation that was allocated off-heap via mmap. When this allocation is eventually passed back to free, the heap manager will return the whole chunk back to the operating system immediately via munmap rather than attempting to recycle it. For this reason, freed chunks never have this flag set.

In my next post, I’ll talk in more detail about how these free chunks are “coalesced” together, and I’ll discuss how chunks are allocated and recycled using different types of “bins”. After that we’ll look at some different categories of heap vulnerabilities, and how they can be exploited by attackers to remotely take control of vulnerable programs.

There are a couple of nice phrack articles on heaps I would like to share with you in case you want to read more before I publish the next parts.

Looking for a comprehensive training on exploit development?

Sign up for my upcoming Black Hat USA training in Las Vegas, where I will be teaching a 2-day course on “Arm-based IoT Exploit Development” (3-day training at Infiltrate is Sold Out). If your company is interested in private trainings and wants to save around 50% compared to conference trainings, send a message to azerialabs@gmail [.] com.