Last week, Google published a series of blog posts detailing five iOS exploit chains being used in the wild that were found by Google’s Threat Analysis Group (TAG) team back in February. The reverse-engineering of how these exploits work by Google’s Project Zero team is very complicated and detailed, and for professional exploit developers or platform security engineers, there’s lots of information in these posts on how these specific exploits worked, along with how Google approached analyzing them.

For this reason, I want to do a write-up of one of the iOS exploits that Google found with a slightly different focus. As we walk through the various stages of what the exploit is doing, we can also look at some major vulnerability categories and exploitation strategies in general, and hopefully by doing so we can pull back the curtain a little on the magic of modern memory-corruption exploits, and see the huge amount of engineering that enables exploit developers to turn software defects into reliable exploits.

In this first part of the series, I will give an overview of the different stages in this exploit chain. In the next few parts, we will cover the various stages of the exploit, and how it builds up tools (called “exploit primitives”) that it can use to take full control of the operating system.

Few modern exploits against hardened devices can fully compromise a device in a single go. Instead, exploit developers usually must chain multiple exploits together, each giving a remote attacker a little more leverage over the device, until the device is fully compromised. Each exploit is built around one or more software vulnerabilities, with large amounts of exploit engineering work so the vulnerability causes the target program to fail in a way the exploit developer can reliably control, rather than simply causing the target program to crash.

In our case, this exploit is the second part of a chain, and is intended to be paired with some other exploit targeting the phone’s web-browser. That first exploit breaks into the web-browser from a webpage hosting that exploit. The exploit takes control of Safari and provides a platform from which this exploit can be launched against the iOS kernel itself. This exploit’s central job is to disable the Safari sandbox, allowing full control of the device. This access is then used to disable various protections on the iPhone, such as the code-signing requirement and platform policy, before downloading and launching a second-stage implant in the background.

In general, this second-stage implant can do anything to the device. But in the specific case of this exploit chain being used in the wild, the implant is used to give interactive control over the phone, as well as steal chat history from WhatsApp, Telegram, iMessage, Google hangouts, the contents of emails from attached email accounts, contact lists, app lists, photos, device information including phone number, name, and IMEI, provide real-time GPS tracking of the target, and upload saved credentials, including Wi-Fi access point credentials from the phone. All of these are uploaded to the attackers’ server, and the implant persists until the device is rebooted. A detailed breakdown of how the implant used in the attack works can be found here.

The iOS exploit, and the general exploit strategy

The iOS kernel exploit used in these attacks is built around a linear heap overflow vulnerability in a graphics driver. The vulnerability itself is not particularly exciting, but it is exploited in a very interesting way: rather than exploiting the heap overflow directly, the exploit developer uses the vulnerability to construct a completely artificial use-after-free vulnerability which is easier to control and build into powerful exploit primitives. The exploit developer then uses these exploit primitives to surgically gain access to the kernel’s private memory, which can be used to disable the devices’ defences against malware. Having done so, the exploit downloads and installs a malicious implant as root on the device. 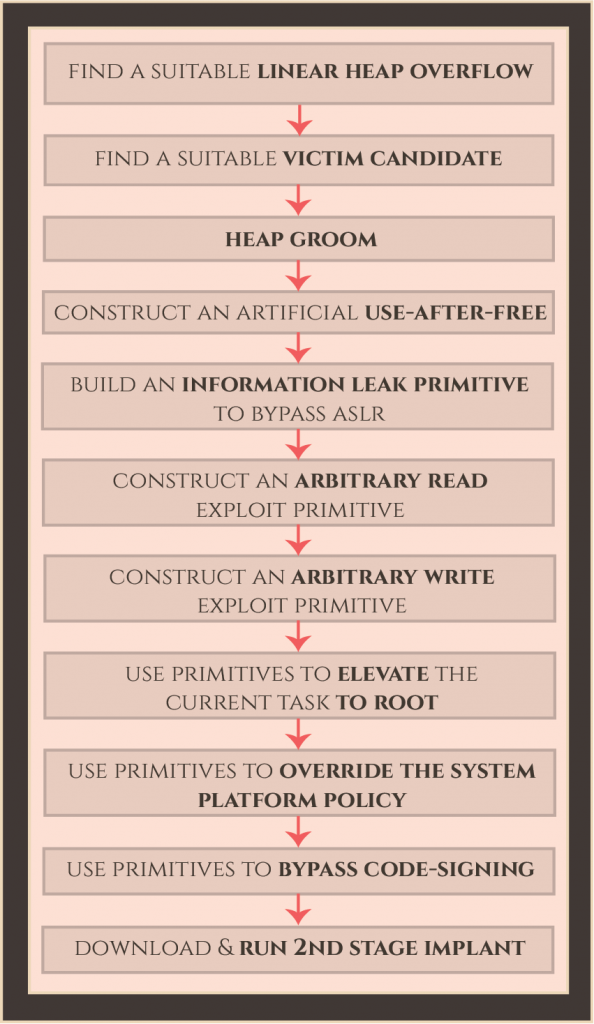 The hacker’s overall strategy for exploiting this vulnerability is laid out below. Over the next few posts, I’ll discuss each step in more detail, and we’ll be able to see how exploit developers turn complex memory-corruption vulnerabilities into reliable exploits, even on modern hardened devices.

A detailed view of the entire exploit is shown below. We’ll cover each part in other posts, after which you will be able to click on the corresponding section for a detailed overview.