Last week, Google published a series of blog posts detailing five iOS exploit chains being used in the wild that were found by Google’s Threat Analysis Group (TAG) team back in February. The first part of my write-up was an overview of the different stages in the first exploit chain. In this part, we will look at the iOS kernel heap and how the exploit developer uses the heap overflow in this exploit.

Before talking about the specific heap overflow used in the exploit, let’s first do a quick recap on heaps in general, the iOS kernel heap in particular, and how heap overflows actually work.

Heaps, in the context of programs written in languages like C and C++, allow functions to allocate a temporary exclusive region of memory to store variables and structured data. Once allocated, these memory regions are permanently reserved until the memory is manually released by the programmer back to the heap manager, at which point the heap manager can “recycle” it for use by another bit of code.

In order for programs to operate correctly, it is critically important that programmers using the heap follow a few simple rules. For example, they must avoid writing to addresses outside of the allocated region, and they must be careful to never use or write to data in an allocation that has been released back to the heap.

Failure to follow these rules invalidates the heap’s exclusivity guarantee. This can lead to different variables ending up unintentionally aliased to the same underlying memory addresses. Since those variables might have very different security properties, like one containing data to be processed and another containing security critical properties like function pointers, this can very often be exploited by exploit developers to take control of the process — in this case, the process taken over is the iOS operating system kernel itself.

In this iOS exploit, the vulnerability around which the exploit is built is in a graphics driver, and occurs on an object allocated via the IOMalloc function. This allocator uses the kalloc allocator under the hood, and will therefore a heap overflow of this object will spill data onto adjacent kalloc-allocated objects.

The kalloc heap allocator works in a very different way to the glibc heap allocator, which I’ve discussed in two previous posts, but its broad purpose is still basically the same: it allows kernel driver developers to allocate and deallocate memory for variables during the normal course of managing the system.

One of the best primers on how the iOS kernel’s kalloc heap allocator works is by Stefan Esser, and can can be found here, but there are a few things we need to highlight. First of all, kalloc allocations are private to the operating system itself. The location and contents of these allocations are not visible to apps running on the device.

Second, objects allocated with kalloc traditionally didn’t use heap metadata between live objects to track things like allocation chunk lengths. When a kalloc heap allocation is released, the programmer must remind kfree of the original allocation length so that kfree can recycle it for other allocations. If this length was misremembered, this would lead to a vulnerability category called a zone-transfer, leading to a heap overflow, although iOS since iOS 9 now has mitigations in place to defend against this attack category. For this reason, iOS kernel developers often use kalloc indirectly through easier-to-use APIs such as _MALLOC, even though the allocation is still handled internally by kalloc.

The specific vulnerability in this exploit is nothing particularly special; the author of a graphics kernel driver made a bad assumption about a complex input data structure and performs a heap allocation whose size is based on this faulty assumption. By providing an input that violates this assumption, the kernel is tricked into writing more entries into that heap allocation than it had planned for, and the final few entries can be made to spill over onto an unsuspecting object adjoining it on the kernel’s heap.

Although the bug itself is nothing special, what is interesting about this heap overflow vulnerability is the narrow field of control that the exploit writer has over the data that spills onto the neighboring object during the heap overflow. Linear heap overflow vulnerabilities often allow an exploit developer to spill attacker-controlled data beyond a memory allocation’s defined limits, but here this is not the case. The overflowed data is necessarily always a pointer to an IOAccelResource2 object. The attacker has no control over the value of that pointer, and also has limited control over the data that it points to.

Narrow field-of-control vulnerabilities such as this one can often feel unexploitable, but a creative approach can often be used to convert such vulnerabilities into a more useful category. In this case, the exploit developer uses the heap-overflow to construct an artificial use-after-free vulnerability, and this serves as the platform for building a more controllable exploit.

This is a little bit complicated, and is perhaps best explained slowly, step-by-step. The strategy is as follows:

The exploit developer now triggers the linear heap overflow. This overflow will cause the victim object’s pointer value to be invalidly replaced with a pointer to an IOAccelResource2 object. This has the effect of orphaning the victim object’s data buffer, but we don’t particularly care about this memory leak for the purposes of this exploit.

Since a use-after-free vulnerability will give the attacker a much wider field of control compared with this heap overflow, this is a solid strategy.

The question then arises: what victim object should the attacker choose?

The attacker has a few constraints on what objects to choose from. The victim object should be something that can lie adjacent to our overflowing object, and thus the exploit developer needs to be able to make it live in the same kalloc.4096 zone near the resources_buf. It needs a kalloc-allocated pointer near the beginning of it, and we need to be able to cause it to release that pointer at a controllable time.

In this particular exploit, the exploit developer eventually settled on using a recv_msg_elem array as the victim object. This technique is not novel, but let’s look at how it works.

Each of the recv_msg_elems within this array begin with a pointer to a uio structure. The structure itself isn’t particularly interesting, except to say that it is allocated via kalloc based on a controllable length field, and eventually released by kfree when the recv_msg_elem array is deallocated at the end of the system call. 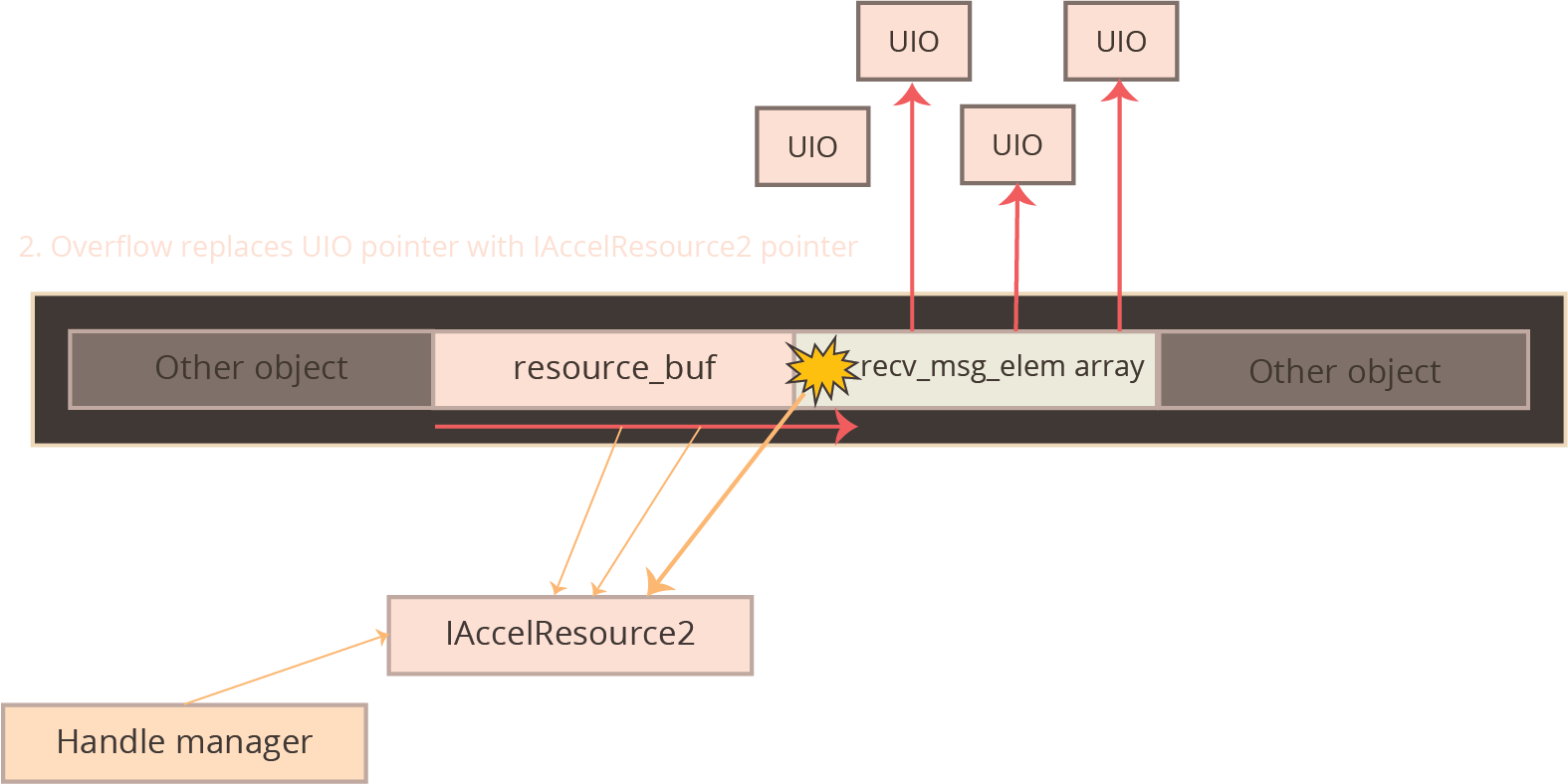 By choosing this recv_msg_elems array as our victim object, we satisfy all of the requirements that we needed and can turn the heap overflow into a use-after-free. Our sequence of operations is therefore as follows: first we arrange for a recv_msg_elems victim array to lie next to our overflowing resources_buf object on the kalloc.4096 heap. Next we trigger the overflow of the resources_buf, which unexpectedly overwrites the first recv_msg_elems array item’s uio pointer with a pointer to the IOAccelResource object.

Next, we free the IOAccelResource2 object and the resources buffer, but the pointer overwrite of the recv_msg_elem array lives on, continuing to point to where the IOAccelResource2 object was, which is now free. The victim recv_msg_elems object has no reason to believe its UIO object has been freed, but any use of it now leads to a use-after-free.

There is one final complexity in using an recv_msg_elem array as our victim object that the exploit developer needs to work around. This allocation occurs at the beginning of a recvmsg_x system call, but that system call blocks the thread waiting for messages to arrive. When the request completes or is cancelled, the recvmsg_x releases its internal victim object. This means that while this is a great victim candidate, the system call will need to occur on a subordinate thread, since it will block the calling thread.

This is why, if you read Google’s write-up, you will see that the exploit developer starts a series of threads, each one calling recvmsg_x with crafted parameters. The threads are not about race-conditions or performance; they are just about arranging for a single recv_msg_elem array to be allocated in the kalloc.4096 zone in a way that gives the exploit developer control over the allocation’s lifetime. Once allocated, the attacker’s primary thread triggers the overflow, overwriting the uio pointer of the first recv_msg_elem array entry. The attacker can then release the IOAccelResource2 object, causing the first recv_msg_elem to suddenly and unexpectedly point to free data, and further use of that pointer will lead to a use-after-free.